One year on but still flush with the success of our first big adventure in stand-up, Zap! Entertainment was again asked to produce the Ha Ha Hamilton Comedy Festival.

Almost immediately, we realised how Freddie Mercury must’ve felt when it came time to release the follow up single to “Bohemian Rhapsody”. How do you top perfection? The 2015 Triple H project had been such a massive triumph – marketing, publicity, calibre of talent, ticket sales, cash raised for charity – the big question was could we repeat the winning formula a second time? 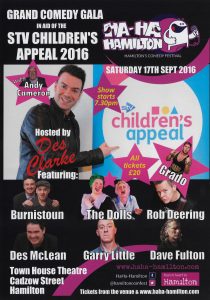 Theatres and venues were booked, artists and their agents negotiated with, Des Clarke and Dougie Jackson did the rounds of newspaper/internet/TV interviews to drum up publicity (see the bizarre video below from the set of “Coronation Street”) and everybody held their breath. Would the tickets sell?

We needn’t have worried because Hamilton’s comedy lovers came out in their droves to support the week-long festival and the annual charity gala. This time around, we recorded highlights of The Townhouse fundraiser (see above) hosted by Des and featuring Dave Fulton, Rob Deering, Garry Little, Des McLean, The Dolls, Burnistoun and Scotland’s godfather of comedy, Andy Cameron. Once again, extracts of the gala performance were broadcast live on television, raising thousands for the STV Children’s Appeal 2016. 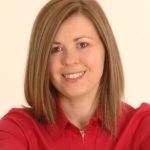